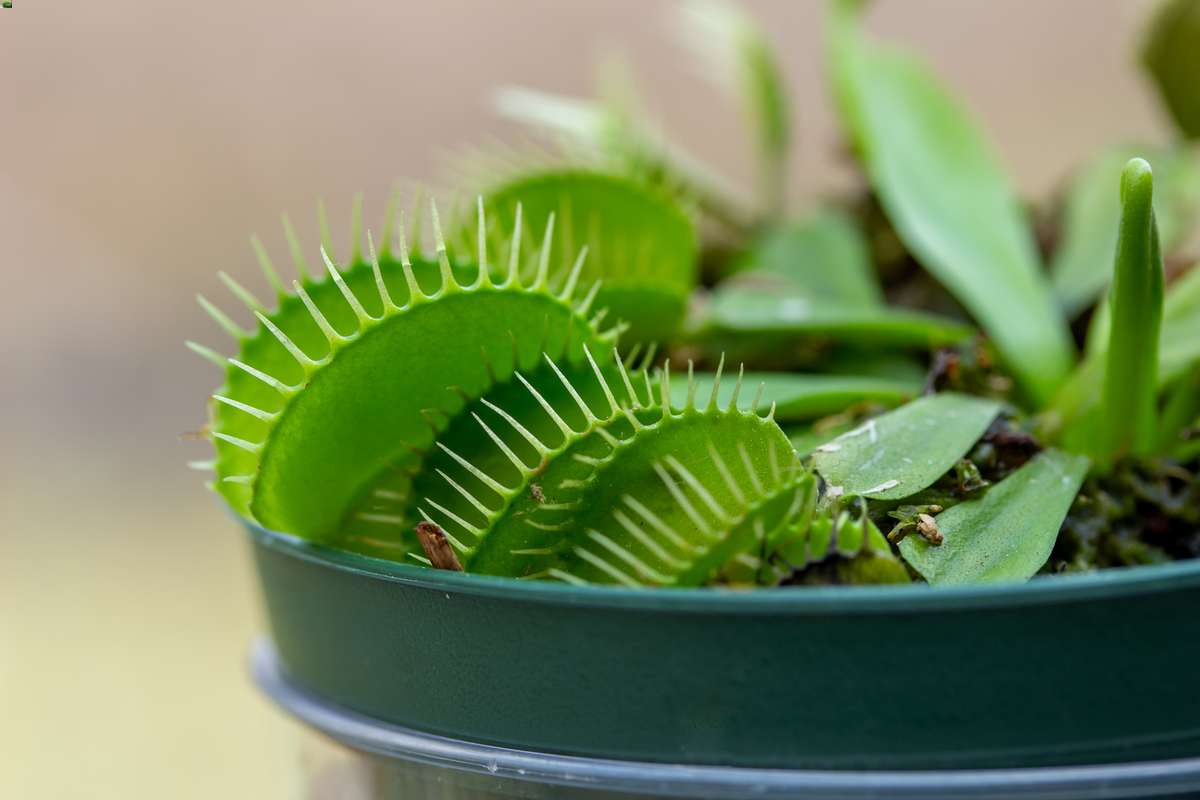 Venus flytraps are fascinating carnivorous plants that are much more interactive than your everyday herb. Thanks to their bifold “mouths” and long, trigger-haired “fangs,” Venus flytraps are one of the most intriguing plants available for home gardeners. While outdoor care is relatively easy in suitable soil and climate, many recreational botanists scratch their heads and wonder how to care for Venus flytraps indoors.

Fortunately, with a bit of information, planning and some dedicated bug-catching, you can easily care for Venus flytraps indoors even when the growing season is over.

Unlike most traditional plants, Venus flytraps don’t require soil nutrients to survive. Instead, they supplement their diet with the delicious insects flying or crawling around your home.

In its natural habitat along the Sandhills and Coastal Plains of the Carolinas, flytraps thrive in the nutrient and mineral-free soil while enjoying a diet of ants, spiders, beetles, grasshoppers, and flying insects.

Once you’ve selected your moss, which makes up most of your soil mixture, you’ll add silica sand or perlite—these help with aeration or keeping a healthy amount of oxygen near the roots of your plant.

If you’d prefer an easier solution, you can purchase a special carnivorous soil mix made especially for Venus flytraps. These specialty soil mixes have the ideal proportions of each soil component to help your indoor carnivorous plant thrive.

Caring for a Venus flytrap outdoors is easy in the right climate. They are hardy plants, easily surviving temperatures from 95° F (35°C) in the growing season to 40° F (4°C) during their winter dormancy.

How Much Light Does an Indoor Venus Flytrap Need?

Caring for Venus flytrap plants means ensuring they get plenty of sunshine, especially you’re growing them indoors. There is very little grass or bush cover around to steal the sunlight in the Carolina bogs, so these charming bug-eating perennials are accustomed to soaking up all the UV rays they need to thrive.

To grow a happy Venus flytrap in your home, you’ll need to provide a location which provides an abundant amount of sunlight. Keep in mind, that in its natural environment, a Venus flytrap may get 12-15 hours of sunlight per day in the growing season.

Should I Grow my Venus Flytrap in a Terrarium or a Pot?

Due to their exotic appearance, many burgeoning botanists incorrectly assume their Venus flytrap is a tropical plant and requires the very high levels of humidity that a closed terrarium can provide.

Closed terrariums look great, but they trap moisture and heat, creating a hostile growing environment for your Dionaea muscipula plant. If not carefully monitored, fungi and bacteria will attack the root system and destroy the plant.

To provide the moderate amount of humidity (above 50%) that a Venus flytrap requires, you can use an open terrarium or a pot.

An open top terrarium is a good container for your Venus flytrap plant. The walls which surround your bug-eating plant will help trap humidity, but the open top helps moderate the humidity levels.

While it is possible for a Venus flytrap to thrive with an open top terrarium, be careful of the humidity, temperature and water drainage issues.

A good choice of container for caring for a Venus flytrap indoors is a tall, insulated pot with a drain plate underneath. Plastic, glazed ceramic, and resin are all solid options. Avoid using a terra-potta pot (unless it’s glazed) as your carnivorous plant will lose too much moisture due to evaporation.

It’s okay to overestimate the size of the pot. Even when caring for a Venus flytrap indoors, you want to give them plenty of room to grow out their root systems.

How to Feed an Indoor Venus Flytrap

Are you wondering how to keep an indoor Venus flytrap alive when it has such specific dietary needs? Don’t worry, it’s easier than you think to feed a Venus flytrap. In many cases, flytraps can handle themselves if there are enough insects around for it to capture in their jaws.

When a live bug lands between the “lips” of a Venus flytrap, they activate three to four tiny trigger hairs on the inside. Once that occurs, the valves close partially but wait for another little tickle to start the digestive juices.

Sometimes, indoor Venus flytrap care means proud plant parents have to provide dead insects for their treasured flora. The challenge is that in order for a trap to close, the trigger hairs need to be activated by a moving bug. A dead bug (obviously) won’t be able to wiggle, so you’ll need to intervene.

When using dead insects to feed your indoor Venus flytrap, drop the snack between the valves, then gently touch multiple trigger hairs with tweezers. After the flytrap partially closes, gently tap the outside of the plant to knock the insect meal against the hairs once more. The valves should close entirely, and digestion begins.

Do I Need to Give my Venus Flytrap Fertilizer?

While it might seem counterintuitive to neglect your flytrap of plant food, fertilizer is an absolute no-no.

One of the most important things to remember when learning how to keep a Venus flytrap alive is that they prefer nutrient-free soil. Adding fertilizer to the soil can spell the end of your blooming relationship with even the hardiest of Dionaea muscipula.

A confusing topic for many researching how to care for a Venus flytrap plant indoors is winter dormancy. During that time, your carnivorous plant goes into a “hibernation” to survive the colder months.

Because they are perennials, they need their dormancy time to rest through the winter to come back snappy and robust in the springtime.

In nature, as the daylight hours are less and autumn chill sets in, a Venus flytrap will begin its winter dormancy”. During this period, Dionaea muscipula might turn black and sickly, with its stem slumping and traps dropping off. To the untrained eye, they indeed appear to have departed for good!

Instead of relegating your indoor Venus flytrap plant to the compost pile, gently cut away any dead leaves, including traps. Then, place the planter in a spot that will consistently stay under 40° F ( 4.5° C) for at least ten weeks, but up to 3 months is ideal.

While your little buddy gets some beauty rest, keep its soil slightly moist. Don’t water as much as you would when it’s awake, as this can drown the root system.

If the temperature fluctuates above 40° F, the Venus flytrap plant will arise prematurely from its winter rest. This is very draining on flytraps and may stunt their overall health, leading to a shorter lifespan.

On the other hand, those with experience in how to take care of a Venus flytrap plant know that temperatures below freezing are problematic, too.

As much as possible, maintain temperatures between 32 – 40° F (0 – 4.5° C) until springtime, when you can enjoy watching your carnivorous herb unfurl its leaves once again.

Just be sure to have a lovely, juicy insect on hand for an after-nap snack!

As of 2014, flytraps are considered a “Species of Special Concern” due to illegal poaching and habitat loss. Taking a plant from the wild is a felony crime, so home gardeners help keep this incredible species alive by finding a reputable Venus flytrap seller.

For the passionate cultivator who dedicates their time to researching how to take care of Venus flytrap plant, you can expect your bug eating perennial herb to live for up to 20 years if you learn all the tricks for how to care for a Venus flytrap indoors.

Recommended Products to Care for a Venus Flytrap Indoors

Can my indoor Venus flytrap survive without bugs?

Unlike a typical pet, taking care of Venus flytrap indoors doesn’t require daily feedings, and in fact, the Dionaea muscipula can survive for long periods without eating a bug. Given this carnivorous plant relies on the nutrients from insects, its health will slowly decline until it finally catches and digests one of it’s favorite foods.

What can I feed my indoor Venus flytrap if I don’t have bugs?

Unfortunately, any non-insect food will likely spell the end of your beloved, toothy companion. Venus flytraps have no trouble finding all the food they need to survive when you raise them outdoors.

If you’re not having much luck catching a live lunch for your Dionaea muscipula, dead insects are a suitable alternative. You can also purchase feeding insects from pet stores, like mealworms and crickets.

Can I feed my Venus flytrap dead bugs?

Yes! You’ll need to manually activate the trigger hairs to start the digestive process, though.

You may keep your Venus flytrap alive for a few years, but ultimately no, a flytrap cannot survive with just water. A flytrap’s favorite food provides all of the nutrients it needs to supplement its typical photosynthesis-based diet. Without them, though, your bug eating plant will not have the nitrogen and phosphorus to thrive.

How often should I water my Venus flytrap indoors?

Venus flytrap care requires proper hydration. They prefer humid soil, so give them just enough H2O to keep the peat moss damp but not soaking. Avoid allowing their growing medium to dry out completely.

Can I water my Venus flytrap with tap water?

It’s important to use distilled water, as tap water contains minerals which are harmful to Venus flytraps.