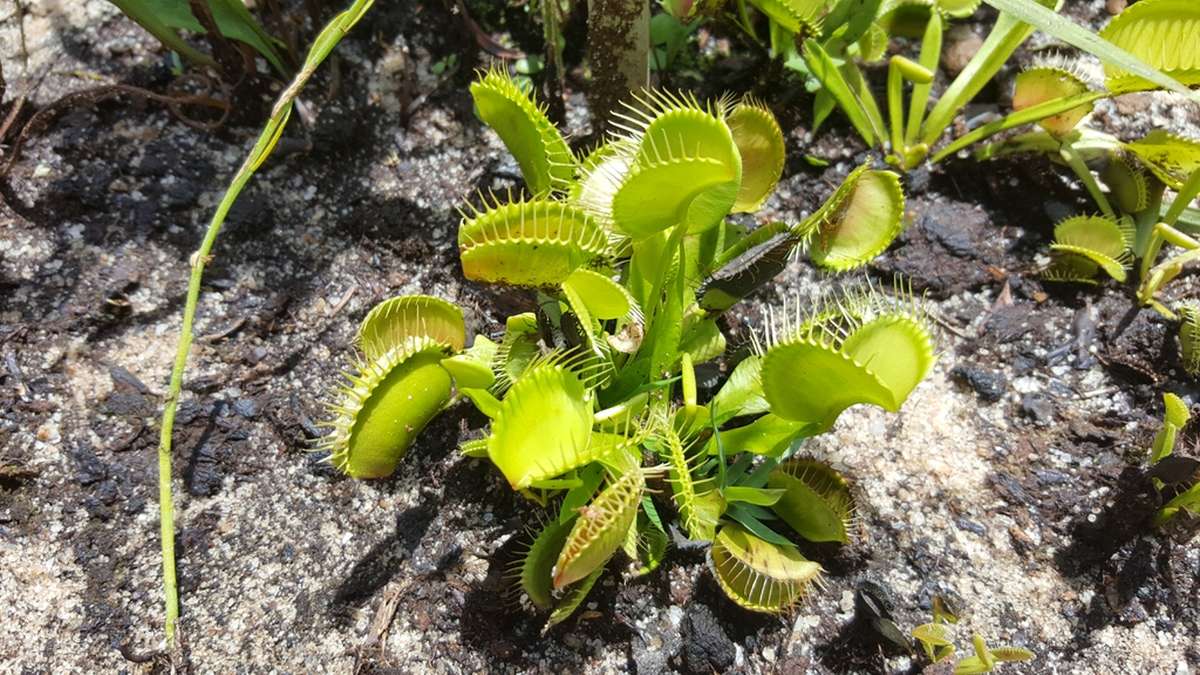 The carnivorous Venus flytrap (Dionaea muscipula) is an incredible perennial plant that has stolen the hearts of plant lovers across the world. Not only are they beautiful and otherworldly looking, but they also eat pesky insects like ants and spiders.

Although they can live for years in the wild, they sometimes die prematurely as an indoor or outdoor houseplant due to the average gardener’s lack of knowledge on how to care for Venus flytraps. Many wonder how to take care of a Venus flytrap properly.

In this article, we will teach you everything you need to know about caring for a Venus flytrap outdoors, including how to keep a Venus flytrap alive, its optimal soil mixture, light requirements, and how to keep your plant healthy in the winter months.

Taking care of Venus flytrap plants outdoors is relatively simple. You need only follow these Venus flytrap care instructions. To grow and care for your Venus fly trap outdoors, you will need a few items.

Make sure you have a set of gardening gloves (pink butterflies are optional) and a hand trowel on hand before you get to work planting your Venus flytrap. This will make transplanting your plant from its nursery pot to its permanent home a little easier.

2. A Pot or Container

Outside of their native habitat, Venus flytraps grown outdoors do best as a potted plant. They make lovely additions to patios or flower gardens.

Mature Venus flytraps only grow about 5” tall, so they don’t require large pots. Your plant will love a pot that has some depth to it so its roots can grow deep and strong.

Venus flytraps require soil with good drainage and poor nutrients. We’ll go into depth on this later, but for planting purposes outdoors, it is best to buy a pre-mixed Venus flytrap soil. If you plan to mix your Venus flytrap soil yourself, try 1 part perlite, 2 parts peat moss, and 1 part sand.

If there’s one thing Venus flytraps hate, it is spring water or tap water. Venus flytraps are incredibly sensitive to the minerals and chemicals found in these water sources and will become damaged or even die if they are watered with them regularly.

Instead, make sure you have water on hand that has undergone reverse osmosis. Distilled water or rainwater are excellent water choices that your carnivorous plant will love.

How to Plant a Venus Flytrap Outdoors

To plant a Venus flytrap outdoors, you first need to gather your pot and carnivorous plant soil mixture. Dionaea muscipula is a relatively small plant, but the pot you choose must have between 4 to 5 inches of depth for the root system to develop adequately.

If you have purchased your Venus flytrap plant from a hardware store rather than a nursery, chances are it has not been living in the best lighting conditions. You will need to harden your new plant by gently introducing it to direct sunlight 1 hour a time for up to several weeks. This will keep your plant from going into shock and its leaves from turning black.

Where to Plant a Venus Flytrap Outdoors

Where you plant a Venus flytrap outdoors is just as important as how you plant it.

Venus flytraps are perennial plants native to North and South Carolina, where they grow in humid, boggy conditions with ample amounts of sunlight. For optimal growing conditions, you will want to look for a spot in your yard or patio that gets at least 6 hours of direct sunlight, depending on the season and outdoor temperatures.

This carnivorous plant can be grown outdoors in USDA Zones 7 through 10. If you live outside of these growing zones, caring for a Venus flytrap plant outdoors can be a little more complicated due to low temperatures and weather conditions like snow.

Contrary to the needs of most plants, Venus flytraps like acidic, nutrient-poor soil. The lack of soil nutrients is the main reason why this carnivorous plant evolved to supplement its diet by eating insects.

Venus flytraps also prefer their soil to be extremely humid and moist. A good soil mixture for growing outdoors is soil made up of peat moss, perlite, and sand. The peat moss helps retain the moisture Venus flytraps need to thrive, while the perlite and sand help maintain good aeration and drainage.

Using regular potting soil is not recommended, as its contents will burn a Venus flytrap’s roots and kill the plant very quickly.

Do I Need to Give My Venus Flytrap Fertilizer?

Adding fertilizer to your Venus flytrap is also a huge no-no.

Like regular or enriched potting soils, fertilizer has minerals and chemicals in it that a Venus flytrap is much too sensitive to tolerate. Adding fertilizer to your plant will damage its root system and kill it.

How Much Light Does an Outdoor Venus Flytrap Need?

Dionaea muscipula care requires full sun to thrive. However, they do not appreciate direct light for more than 4 to 6 hours at a time in the hot summer months, particularly in dry, hot climates like the desert.

When growing a Venus flytrap outside, you will want to place your plant in a spot that receives 8 to 12 hours of bright, indirect sunlight. This will keep your plant from getting too hot and avoid crispy brown leaves.

You can tell if your plant is getting enough light based on how red or pink the interiors are. If it doesn’t have any color or its leaves are extra long and thin, it needs more light, and you should relocate it to a sunnier spot in your yard.

Suitable Temperatures for Venus Flytraps Outside

Venus flytraps can tolerate cold temperatures for a short time but generally prefer not to grow in anything cooler than 35 to 50 degrees Fahrenheit (2 to 10°C). An outdoor Venus flytrap that comes into contact with temperatures lower than this can freeze and die.

When temperatures cool and autumn fades into winter, Venus flytraps go into a natural state of dormancy. Essentially, they take a nice long nap to conserve energy and survive the winter. You may worry about taking care of a Venus flytrap plant that has gone dormant, but their needs during this time are rather limited.

You will know your Venus flytrap has entered into a state of dormancy when its leaves turn black. It will appear as though your plant has perished, but don’t worry. It is completely natural for your Venus flytrap leaves to turn black during winter dormancy. In the springtime, the plant will start to produce new leaves.

Venus flytraps can only survive winter outdoors if you are located in USDA Zones 7 through 10. Venus flytrap enthusiasts outside these zones should relocate their plants inside during winter and place them in a cold, south-facing window. A porch or garage is a great place to winter your plant.

When grown outdoors, Venus flytraps can easily capture the prey they need to thrive. However, if you move your outdoor plant inside during the winter months, or it isn’t feeding properly, it may need a little help getting the nutrition it needs.

If you want to supplement your carnivorous plant’s diet, you may wonder what do Venus flytraps eat? You should only feed Venus flytraps what they would catch naturally in the wild. This means spiders, ants, flies, crickets, and other insects found in their natural habitat.

Don’t worry about feeding your plant more than twice a month, and never try to feed it when it’s gone dormant. And, unlike some of these funny Venus flytrap videos, don’t feed it your fingers or jelly beans!

When outdoors, you should avoid touching the trigger hairs, or trichomes, on your Venus flytrap. Doing so will trick the plant into thinking it’s caught a meal and will shut the trap. Each trap only closes a couple of times during its life before dying. Messing with it just to see the trap close is undeniably fun, but it will also cause your plant to shed its leaves before it’s ready.

Finally, make sure you keep your Venus flytrap’s soil moist at all times. If you live in a climate that experiences droughts or less than frequent rainfall, be prepared with distilled water or invest in a reverse osmosis water system.

Let’s look at a few common questions you may still have about how to take care of a Venus flytrap plant outdoors.

Can I leave my Venus flytrap outside during winter?

Caring for Venus flytrap plants in the winter is simple. If you live in an area of the United States outside of Zones 7 through 10, you will not be able to leave your Venus flytrap outside in the winter months. The temperatures and weather conditions are too cold for your plant to survive.

How much sunlight do outdoor Venus flytraps need?

Outdoors, a Venus flytrap requires at least 4 to 6 hours of bright, direct sunlight to grow. In hotter temperatures, they may require more indirect light to keep the leaves from burning.

How often should I water my Venus flytrap?

Venus flytraps like moist, well-drained soil. To maintain this, it is important to water your Venus flytrap every 2 to 4 days, depending on the season and temperature outside.

What temperatures can a Venus flytrap tolerate?

Venus flytraps grown outside can tolerate a temperature range of 35 to 90 degrees Fahrenheit (2 to 32°C). Any warmer and they risk burning, while colder temperatures can cause the plant to freeze and die.

Is it illegal to grow a Venus flytrap?

Venus flytraps are completely legal to grow and own. They are classified as an endangered species, and it is a felony to collect them from the wild. If you do not grow your Venus flytrap from seeds, be sure to buy your plant from a reputable carnivorous plant supplier.