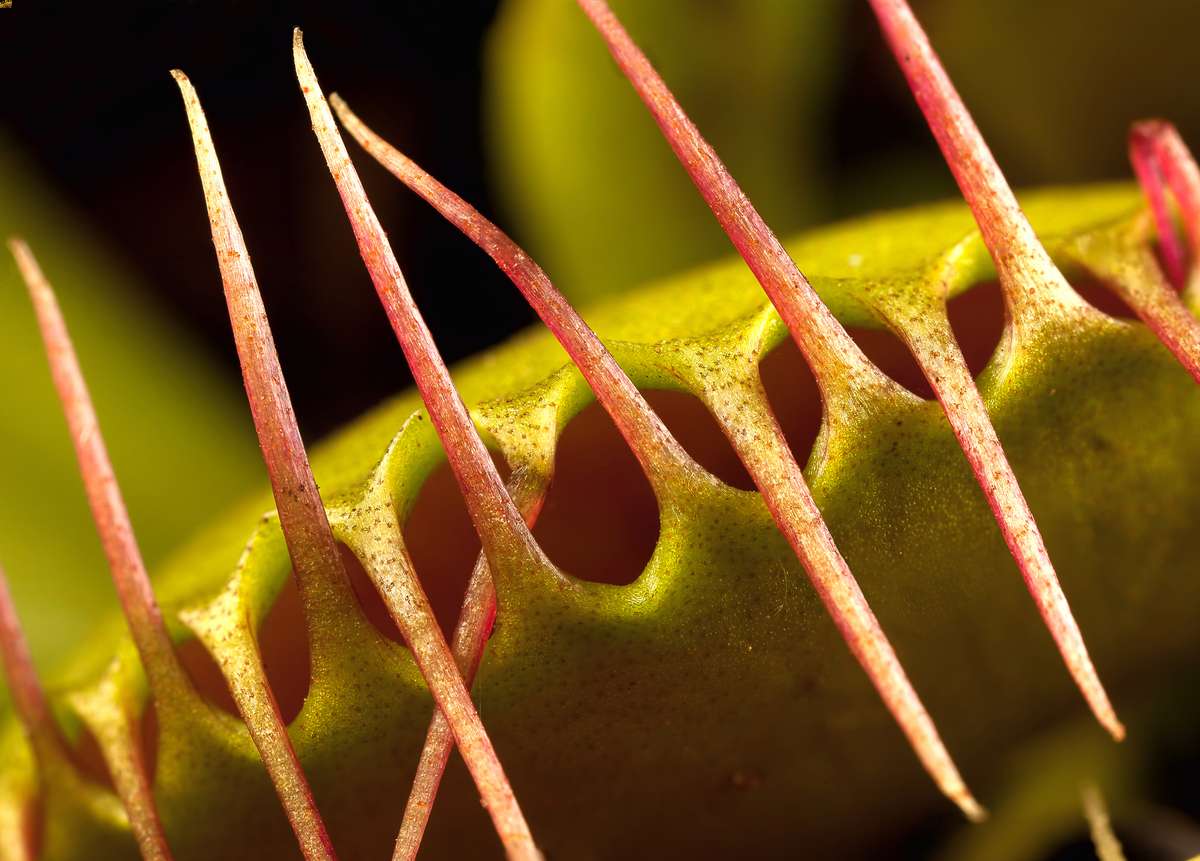 Venus flytraps are incredibly interesting carnivorous plants that can both fascinate you and creep you out. One glance at this charismatic insectivorous plant will have you asking a host of questions, such as:

We’ve all thought of these same questions before, so we thought it’d be a good idea to learn some fun facts about Venus flytraps.

You may not have realized this was possible, but the Venus flytrap is a carnivorous plant that eats crawling insects, such as flies and other bugs. Venus flytrap food ranges from flies to spiders to beetles and every insect in between.

The only insects that this plant doesn’t eat are those that pollinate it, like bees.

If you’d like more detail on what a Venus flytrap eats, we have a full blog post on the topic. Or, even better, watch these great videos of Venus flytraps capturing insects.

While it may seem like these wide-mouthed perennial plants willingly shut their jaws on demand, the closing of their two hinged lobes is an involuntary reaction that happens when the plant is touched.

Venus flytraps have hair-like projects that are called trichomes. When prey comes into contact with these tiny trichomes (hairs), the lobes automatically snap shut.

Interestingly enough, the plant saves its energy by only snapping shut when the trichomes are touched multiple times in a row. A Venus flytrap can only close so many times without being fed, so this amazing mechanism increases the chances that the lobes will snap shut on an alive crawling insect and helps avoid a false closure (on a falling twig for example).

When most people think of the Venus flytrap, they picture a large, toothy mouth without a face or a head. The image can be quite alarming – terrifying, even.

But the truth is that even these meat-eating plants bloom pretty flowers. These plants are perennials, which means that the Venus flytrap life cycle repeats, and they bloom every year. When they do, they sprout gorgeous white flowers with green veins.

4. Venus flytraps can live as long as 20 years.

As we already mentioned above, the Venus flytrap is a perennial plant that grows back every year. There are lots of flowers that grow back, but not every flower lives longer than a few seasons.

The Venus flytrap has been known to live as long as 20 years and may even live longer.

The trap on each plant can only open and close so many times. After opening and closing several times during the season, the trap will eventually die and fall off.

During the next blooming season, the Venus flytrap plant will sprout a new trap from the underground stems it has.

A Venus flytrap in its natural habitat can easily get triggered by inanimate objects that fall in its lobes. Natural items like twigs, leaves, and rocks can cause the jaws to snap shut.

When a Venus flytrap closes its “mouth” on something, it will wait to detect motion from the object to verify that it has caught a live insect. If the object doesn’t move, the plant will open again.

You may have noticed that Venus flytraps often have a bright red color inside of their lobes. This bright color has a specific purpose: to attract prey. Additionally, the insectivorous plant secretes sweet nectar that also draws in insects.

Once they have caught an insect, the trap will secrete an enzyme that fills up the trap and drowns the victim to kill it. Then, the digestion process can begin.

After a Venus flytrap catches an insect, it has to start the digestion process to break it down and absorb all the nutrients inside of it. This process can take a very long time – as long as several days or even weeks.

Once the carnivorous plant has eaten its meal, it can go several months without another meal and still survive. However, you can feed it as many bugs as you want if you are lucky to own one of these amazing insectivorous plants.

Most experts advise that you only feed one trap on your Venus flytrap plant at a time, as your plant will sprout multiple traps.

8. Venus flytraps do not need to eat bugs.

However, Venus flytraps in the wild don’t get enough nutrients from the soil in their natural habitats. So, eating insects is their way of supplementing their diets so they can thrive rather than just survive.

9. Venus flytraps are completely harmless to humans and pets.

As scary as they may look, Venus flytraps cannot do any harm to either humans or our pets. It’s important to remember that Venus flytraps do not have teeth, and don’t chew on their victims. Their traps are made to trap small insects – no more, no less.

If you did decide to stick your finger in the trap, you would barely feel any pressure at all when it closes.

They’ll also catch the pesky bugs that get into your home for you, which is a nice benefit.

10. Venus flytraps are named after a goddess.

One question always sticks out among the rest: how did the Venus flytrap get its name?

The scientific name for Venus flytrap is dionaea muscipula, but we all know that is not the name we’re referring to.

The first part of the plant’s name, Venus, is in reference to the Roman goddess. Venus is known as the goddess of love and beauty. An ancient mythological story of Venus details an instance where she fashions a net out of gold to catch lovers who betray their partners.

Not only is the Venus flytrap a beautiful plant full of inviting color, but it also entices and traps its prey – just like the goddess Venus. That seems like an appropriate name to us!

11. Venus Flytraps are from the United States!

I always thought that Venus flytraps were some exotic plant from a deep, dark faraway jungle, like Borneo or Indonesia or something. But, a few years ago I was on a Southeastern USA family road trip and spent a few days in Wilmington, North Carolina with my kids.

It was during our stay in Wilmington that we learned that the Venus flytrap is native to North Carolina and South Carolina. In fact, they do not grow naturally anywhere else in the entire world! Who knew the exotic Venus flytrap is endemic to the United States?!? Amazing!

A Not Fun Fact: Venus Flytraps are an Endangered Species

One not so fun fact about Venus flytraps is that they are now an endangered species, largely due to habitat loss and illegal harvesting. If you make the exciting trip to North Carolina to see these delicate carnivorous plants, help get them off the endangered species list by just looking. Never touch them, trigger their traps or harvest any. Let’s keep the beautiful and fascinating Venus flytrap alive for future generations to enjoy!

We hope these 11 fun facts about Venus flytraps help give you a new appreciation for the wonders of this famous carnivorous plant!